The Command Card Primer - Another View 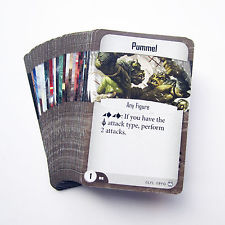 This blog post was inspired by the fantastic article by Eric Dietz, author of Twin Troopers. I'd highly suggest giving it a read, particularly since this is in response to his article.

So, reading through his article, I largely agreed with what he said. If I really wanted to, I could change some of the categories a bit, such as reducing it to more fundamental "deal more damage", "prevent opponent from doing things", etc. But that's largely an issue of pedantics, and is dependent on how many categories you want. But after I finished it, I had no real problems with the article. I rather liked his categories, even.

But as I thought about it more, I realized I had never defined categories for command cards. Why was that? I'm a very analytical person, so creating categories is like breathing to me. But why had I never done it?

In Magic the Gathering (from a long time ago, in a galaxy far, far away), I would categorize cards like this. I ran a control deck, and was constantly going back and forth on switching control for damage when I couldn't finish and enemy, and back when I lost control early on. Cards were often easy to categorize, I could switch some burn cards for some creatures, early creatures for late creatures, so on and so forth.

But in Imperial Assault, command cards are entirely different. One command card will have less effect than one magic card and you'll rarely see more than six or seven cards in a game. There's just not enough nuance to command cards to think "my ratio of damage to shenanigan cards is off, let me switch some around". The command cards just don't do enough frequently enough to really need to balance what sort of cards you put in.

Now, don't take this to mean that command cards aren't important. They are. They can and will affect the flow of a match and can definitely swing the outcome of a game. But I suggest that you have to look at command cards on a higher level of abstraction.

I suggest three "categories" of looking at command cards: Universal, Situational, and Non-Gamestate-Affecting. And so we can rank cards, we'll need another measurement, which I'll refer to as Magnitude. Magnitude is really just a measurement of how much of an effect a card has.

Universal
Universal command cards are ones that you can play at any point in the game in order to get tangible results. A great example of this is Assassinate. 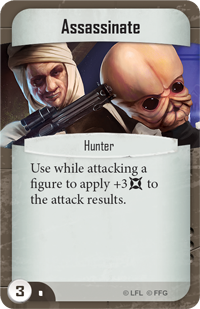 Assassinate can be used during any attack. It will always give you 3 damage. You can use it while attacking, so you probably don't have to worry about the X-Man or using it meaninglessly. There is not a situation in which this is a dead card in your hand. This is a good, universal command card.

These command cards are also all universal cards. They all have a measurable effect of the state of the game and can be used at any point in the game. (When to use them is a trick of its own, however.) 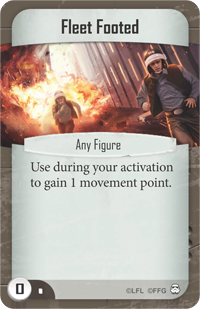 Situational
Situational cards are going to be useful, but only sometimes. It may require a specific trigger, or only hold value under certain circumstances. Either way, the value of the card is going to be inherently lower than a universal equivalent. Chances are, in order to see one of these cards in your deck, the magnitude is going to have to be higher than it normally would. 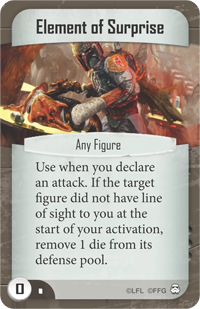 Case in point, Element of Surprise. Very similar to the above mentioned Heightened Reflexes. Both have the same effect, more or less. But Element of Surprise requires a certain situation in order to be used. The noticeable difference is price. The reason Element of Surprise should be taken in every list is that the required circumstance is fairly achievable and that the magnitude is significantly higher than almost any other 0 cost card.

Here are other situational cards that are really good. These all are effects that are only useful in certain circumstances, but the effect is worth having to wait for the right circumstance. Frequently, these command cards provide effects you won't find in universal command cards, and have a magnitude high enough to warrant taking them. 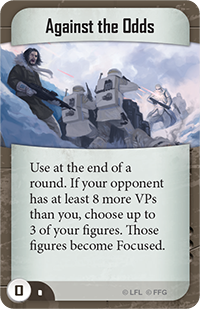 For situational cards, you also have to look at the required condition. I love Against the Odds to pieces, but I don't include it in my command card decks anymore. The condition to use is just not worth the effect. Being down by 8 points is a lot, and 3 focus is likely to not make up the difference. The magnitude may be high, but the circumstances required kills the card.

Non-Gamestate-Affecting
Non-gamestate-affecting cards are going to be cards that don't do anything to affect the game state. Sometimes these can be really appealing. They can be useful, even. But in the end, they are worth the least because they don't influence the flow of the game. 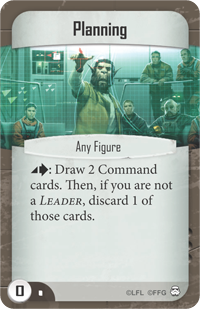 Planning is the epitome of a non-gamestate-affecting card. Yes, it draws you command cards. Yes, those command cards could be what changes the flow of the game. But what has this card done for you? It's taken an action, and has not dealt or prevented damage, has not prevented your opponent from doing anything, has not gotten you into a better position.

Non-gamestate-affecting cards are the cards that need to be looked at every time you go through the deck. You need to ask yourself "What is this card really doing for me? Could I do better with something else?" 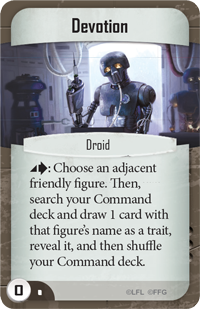 This is the one non-gamestate-affecting card that I run with any frequency. It's guaranteed to give me exactly what I want from my command deck. It's reliable and relatively easy to use. But every time I add it into my list, I remember the times I get Devotion and the only character command card in my opening hand. I still run it, because the magnitude of the character cards are often enough to make up for this card, but I'm tempted to cut it every time I look through the deck.

Moral of the Story\
The idea I'm trying to give is that it doesn't really matter what the effect of the command card is, the important thing is how often you can use it successfully and how much of an effect on the game it has. When you look at a command card, you need to look at those two things, and ask yourself if there's an alternative that is easier to use.

Building a Command Deck
The way I start a command deck is I go through my command cards and pull out all the cards I'd really want the effect of during a game. Then I start with the most expensive, and look at each one. I consider the power of the card, I consider how often I get to use it in previous games. I'll go through them and identify those I definitely want in the deck and those I am uncertain about. I'll go through and fill out or slim down whatever command deck I end up with. It's hard to quantify this process, seeing as it's a personal, subjective process. In the end, you just have to do what works best for you.


I hope this is helpful for anyone who isn't completely confidant in their process for making the command deck. In the end, everybody builds their command deck differently. Maybe the method described in the Twin Troopers episode suits you better. Maybe you like my method. Maybe you have a method of your own. But I hope that this article has shed some light on how you like building your own command deck.

How do you build your command deck? Which method of categorization do you think works better? I'm curious to hear what you all think. Feel free to leave a comment below. 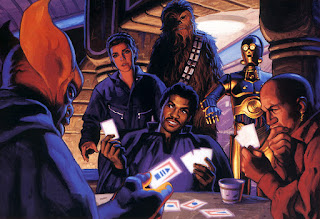